New Year’s Day is a worldwide celebration. It starts New Year’s Eve and goes well into the morning on January 1st. But as you know, New Year celebrations actually happen all year, thanks to the traditions of many cultures and religions around the world.

Our event venues are always booked for San Francisco’s January 1 celebration, but families and social groups have often chartered a bay cruise with us throughout the year for their own New Year special occasions. And why not? Marking the new year in each culture offers a chance for family and friends to gather and celebrate together with the traditional festivities and cuisines each culture holds dear. But we have had a number of groups take a San Francisco Bay yacht charter with us to celebrate other New Year dates.

New Year’s Eve Dates Around the World In 2019

Gregorian
The Gregorian New Year is the one we all celebrate on the night of December 31st and continuing into New Year’s Day. Other cultures celebrate on January 1, but in their own way:

Many Asian cultures celebrate the Lunar New Year, which falls on February 5th in 2019. In San Francisco, the parade through Chinatown is the most famous celebration, but Vietnamese, Korean and other Asian communities will be celebrating that date in their traditional ways.

Many Hindu groups celebrate New Year’s Day during the first day of the first Hindu month, Chaitra, which falls in April in 2019, but some communities celebrate new beginnings as late as October, as with the festival of Diwali.

Nowruz is the religious and cultural Iranian New Year, celebrated on March 21st this year.

Muslims marks the New Year day on the first day of the month Muharram. Muslims will celebrate the New Year on the evening of August 30th in 2019.

Rosh Hashanah is the Jewish New Year. Celebrations start at sunset on September 29th in 2019. 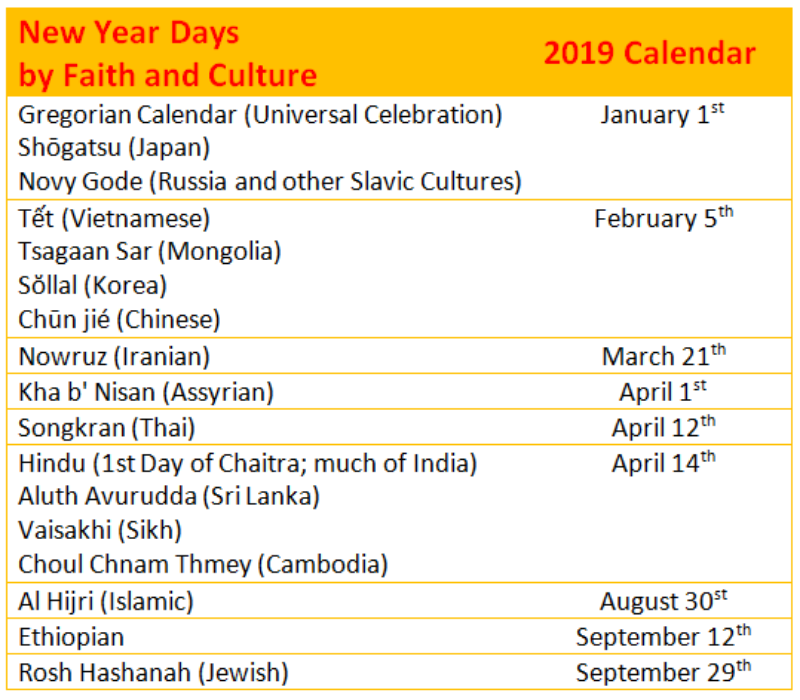 Whenever you wish to celebrate your New Year, we offer the perfect bay area event venue. Spectacular views, everything arranged for you, easy parking and boarding at our slip in Alameda. Contact us for more information! Or call: 877-346-4000